Originally, Hunt intended to provide food and material for clothes, shoes and tools. In the hunter-gatherer cultures the hunting varied a lot depending on the terrain, prey and also the technological and cultural factors. Hunting weapons ranging from relatively small weapons as sticks and stones to more specialized weapons like the

Boomerang and the blowgun. Dogs were also trained for hunting during the Neolithic period. The horse was used for hunting during the second Millennium BC, when agriculture societies began hunt and protect their crops and herds. In ancient Egypt the hunt was professionalized and also became a pleasure for the aristocracy. Hunters followed the aristocracy when they were out hunting for fun. They also hunted animals in the parks for recreational hunting. Even among the Babylonians, Assyrians and Greeks hunting had a really high status. Hunting with Falcon and Hawk were carried out by the Assyrians prior to 700 BC. However, the Romans regarded hunters as a lower social class. 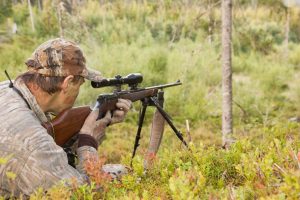 Forest bird like Pheasant, Black grouse and Hazel Grouse are hunted traditionally by the help of dogs, the Pointing dog and the barking bird dog. The barking bird dog doesn’t scare away the birds unless the handler wants them to, they follow all commands. Often a dog barks to distract the bird and thereby making it easier for the hunter to advance forward until a safe shot can be fired. Pheasant birds may be found roughly from late August until last January, depending on where in the country you live. The black grouse are hunted in a similar way as the Pheasant, the online difference is that it’s harder for many dogs to bark stuck in the trees and also to sit down for a long while. All in all a dog is a very good companion when you are out hunting for Wildfowl. If you want to know more about hunting in the UK you can read about the rules and get a lot of information on this link. Know more about hunting in the UK.